In 2009, the below devotion was written by my husband, Jim Shoffstall who was awaiting a kidney transplant. We found ourselves up against a faith battle. We had to make a choice…we could either believe God was going to clear the path or we could choose to live in self doubt. He never waivered! God cleared that path!

I bet you are wondering what does a kidney transplant have to do with this blog….well….nothing really,. except for the reality check needed for this wife!
Here is why I needed that reality check….

Recently, we started this new ministry, and over the past 3 months, I found myself living the later listed above…living in doubt that God could clear what I perceived as unmovable mountains. Yes, I am ashamed to publicly admit that, but it is true. Even though I have seen God do great things time and time again, over and over, and even up close and personal with my own husband, I still found myself battling the devil of doubt.

I do not have an answer to why that is. I do not know why I found myself letting the devil live rent free in my head. You would think that when a person sees God do something over and over and over, why would they ever doubt He wouldn’t do it for them? I don’t know why…but that was me. I was/am a Peter. I am a Thomas. I hate that about me. I pray every day that God takes that away from me…and He is doing his part…but I still keep battling Him…It’s like I say to God “yeah, that was great, but I now need to see something else”.

Anytime you step out in faith and do something that God has asked you to do, it is going to come with a cost, whether it be push back from people who don’t like what you are doing, hurt feelings from others who feel like you shouldn’t be doing what you are doing and/or, lost friendships,.. etc. I experienced them all…and well, to be honest, it was/is very hard for me. It is only natural to not want people to be mad at you or to not want people to not like you…and when it happens while you are doing God’s stuff, it is so easy to fall in to the trap I found myself living….telling myself :THIS IS NOT WORTH IT!! I CANNOT DO THIS! SERVING JESUS IS NOT SUPPOSED TO BE THIS HARD! I AM GOING TO QUIT!!!

When I shared the above words with my husband, he looked at me and well….he laughed…I mean…really laughed. I wanted to punch him…how dare he laugh at me when I am in the middle of pity party? After all, I sent him a personal invitation to join my party, and what kind of present does he bring??? He brings laughter That was so not funny to me.

But in that laughter, he gently reminded me that serving Jesus is NEVER easy, I CAN do this, and it IS worth it, and I WILL NOT QUIT! He then asked me if I remembered what happened to all of Jesus’ disciple “Cheryl”, he said, “Do you think it was easy for them? They were murdered for following Him….like beheaded kind of murdered!!”

He reminded me that at least I have that going for me… chances of me being beheaded are pretty slim…and he went on to reassured me that I will not rot away in prison like some of Jesus’ disciples did….so, again, in his unique way of loving me enough to tell me when I am wrong, he took me out of my pity party and invited me to look around and see what God had done for our ministry over the past few months:

– Cleared the way for us to take the HS Sr. High to a 3rd world country (that has never happened at our church before)

– Grew a vision from 1 in home Bible Study of 3 people, to now over 8 studies of 75 people (all of whom get fed after study) and is growing daily.

– Feeding program that has allowed people to not only hear about Jesus, but gets a fully belly afterwards

– Provided 3 Godly Men from Christ Church who graciously offered to transport a van full of people to Chicago to catch a 4am flight..which means they drive overnight…both dropping us off and picking us up.

– Provided us with ample supplies to take down and unique ways in which they were provided:
– a WalMart associate who offered to mark down tennis shoes to $1 just so kids could have shoes
– kids who donated their piggy banks to buy flip flops
– a Church who willingly gave of $2 per person so cows could be purchased
– a private $$ donation from a non believer who said “While I may not believe in what you believe in, I do believe in YOU…now take this, and go change the world”

Jim is right, you know. God has moved so many “unmoveable” mountains. Shame of me for ever doubting. But I did. For that, I asked God to truly forgive my doubt that He could things I could never imagine.

Don’t be like me…Don’t ever doubt God….I promise, He is so much bigger than what we think is impossible. I wasted a lot of time worrying about things I shouldn’t have, crying over things I could not control, and stressing over things God had already taken care of…I just didn’t have the faith enough to see it or believe it.

Lord, I pray if there is anybody out there who sufferers from lack of faith like I do at times, I pray that you will remove ALL doubt. May their eyes be opened as wide as mine have been. Forgive us for when we doubt and guard our hearts and minds to keep the devil from ever trying to let us think You can’t do something like move a mountain! 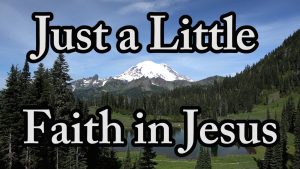 You of Little Faith

During the fourth watch of the night Jesus went out to them, walking on the lake. When the disciples saw him walking on the lake, they were terrified. “It’s a ghost,” they said, and cried out in fear. But Jesus immediately said to them: “Take courage! It is I. Don’t be afraid.” “Lord, if it’s you,” Peter replied, “tell me to come to you on the water.” “Come,” he said. Then Peter got down out of the boat, walked on the water and came toward Jesus. But when he saw the wind, he was afraid and, beginning to sink, cried out, “Lord, save me!” Immediately Jesus reached out his hand and caught him. “You of little faith,” he said, “why did you doubt?” (Matthew 14:25-31)

It was this time last year when my wife, family, and friends were walking on water. We were preparing to experience the reality of the miracle which God had orchestrated in our lives. The wife of one of my closest friends was prepared to donate one of her healthy kidneys to me. Everything was ready to go.

That was when the tsunami his us.

We got a phone call that none of us ever thought we would receive. The surgeon who was to handle Mary’s end of the procedure had decided to disqualify Mary as a suitable donor due to the presence of an extra vessel on her kidney.

I recall that Mary was upset at the news.

My wife and Mother were devastated.

We had to announce to all who had made so many sacrifices to prepare us to receive this gift that our plans were to be put on hold.

My wife and Mary were both frustrated. My entire family had begun to question whether or not I had chosen the proper hospital and physicians to care for this old body.

I had to remind myself that it was God who had brought us to this point; and for that reason I knew that he would finish the work he has begun. I did my best to share with those around me the peace which I felt knowing that God was not finished yet. He just gave us a helping of wind and waves.

So we continued to wait and pray.

Mary’s two vessels into one making it compatible with my own vasculature. Dr. Garvin of St. Louis University Hospital was the answer to a lot of hearty prayers.

While in this world our faith in Christ will be put to the test. Things will seem to be going so well when all of a sudden; Wham! Something happens and we begin to feel like we’re sinking.

That something might be a sudden serious illness; or perhaps a lost job. It is during times such as those when our attention must remain focused on Christ (did you notice in today’s scripture that Peter didn’t start to sink until he took his eyes off of Jesus and started to look at the waves?). We must maintain faith that Jesus will not allow us to sink and drown.

The miracle God gave us went off without another hitch. Through a young lady named Mary god gave this undeserving sinner a new life. God allowed things to happen in his time, not ours. Our faith was tested. Some passed while some confessed failure. No matter, because when all is said and done:

And when they climbed into the boat, the wind died down. Then those who were in the boat worshiped him, saying, “Truly you are the Son of God.” (Matthew 14:32-33)

How about you? Has your faith ever been tested? How did you do?