The Wise and Foolish Builders

How many of you just read that passage and thought it was only about building your house on Jesus Christ?  While that is true, there is another message here that cannot be overlooked….an important message that we as Christians, often want to forget or are deceived about.  That message is simply this:  STORMS HIT BOTH HOUSES.

It doesn’t matter if you have built your life on Jesus Christ or if you have built your life around the adversary, the storms of life WILL hit both houses.  What the difference, is, though, is whose house will remain standing when the storm passes and the sun is shining once again.  Do not fool yourselves to think that once you give your life Christ and decide to be a follower of Jesus that the storms will never hit your house….that is a lie of the devil.  How do I know?  Because my house has been hit.  Thank goodness I was in a good place spiritually to realize that storms come to Christians as well as non Christians.  What I learned in the storms of my life is that I am grateful I have a faith built on the Rock, so that when that storm comes, I will remain intact. It is those storms that we need to keep our eyes on Jesus and not the storm.  Much like Peter, we all want to take our eyes off Christ and instead watch the waves.  What would happen if we all decided the storms of life had no power over us and we were going to keep our eyes permanently fixed on the One who can calm those waves?

I recently returned from an impromptu trip to Honduras. Normally, we take teams down for a week at a time, we have months and months of planning, time to raise money, time to get things organized.  This trip, though, was needed outside of those normal “mission trip” weeks.  It was the kind of trip where you don’t have time to plan, raise money, or get your ducks in a row.  It was the kind of trip where a tickets were obtained and we were off and running.  It was while I was there, that God really showed me about the Storms of Life….all through 2 little boys.  These 2 boys met each other for the first time in our hotel. They have so much in common for the young age of 6….read about my experience with them over 2 days.

If you think you are exempt from the Storms of Life, just ask these little guys about storms…..they have so much to teach us old farts.

This is what I posted on social media last weekend: 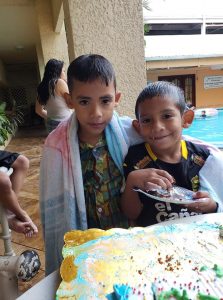 Something captured my heart today. It was these 2 boys. Boys who are the same age, and recently just met each other but have so much in common…
Both recently lost their mothers to death too early….
Both are now being raised by single fathers (very rare in Honduras)…
Both boys have had Jesus poured in to them their whole life….
Both have the heart of gold.
Today they learned a life lesson while learning to swim…. At 1st in the beginning, they did not want to let go of the side of the pool.. After much coaxing, one finally let go..and doggie paddled 3 feet to where i was waiting with open arms. Of course when one went, the other soon followed. Over the course of 2 days in the swimming pool these 2 young boys went from not wanting to get into the pool to swimming almost 20 yd by themselves….as long as they could see me, their confidence grew and stretched the limits of their trust and faith. When they took their eyes off of me, even for a second, the lost their confidence and began to sink. Of course, I was right there to scoop them up from their sinkfall, and then they would go at it again.
When they were finally exhausted, lungs tuckered out, arms like jello, and they just had no more left to give, I had the chance to hold one on each hip and tell them that today proved they could do anything….as long as their eyes are on the right thing…and that thing is Jesus. I remind them that much like swimming…they we watching for me, but in life, they will have to watch for Jesus and they will have to always keep their on Jesus, because He, like me, in the pool, will always be there to catch them, but if they take their eyes off Him they will fall and sink.
I think they understood that simple concept.
Kids get it.
Friends made for life!
Luis and Jonathan…two boys…two tragedies…two boys I already know God has BIG plans for!