This past July, 23 of us boarded up and headed down to Honduras. We brought with us kids from the Sr. High, adults young and old, and tons of supplies.  Some us had to make a 4.5 hr trek to Chicago to catch a great airfare deal, while others had to trek down to Nashville, TN to get decent airfare.  Either way, we got to Honduras!

Our week started out running and well, we never stopped.  We arrived Friday afternoon, after being up for almost 24 hours straight, we were dead tired…no other way to put it.  Once we settled in and unpacked, we wasted no time in getting to work.  Friday night found us enjoying a bite to eat, then visiting one of our in home Bible Studies where we were welcomed with open arms.

Saturday it was up early…no sleeping in for this group.  We boarded 3 vehicles, one of which was a massive open air truck that our younger people loved riding in the back of. Us more “seasoned” folks opted for the vans.  1 hour on the road and we found ourselves at the Jeremiah 29:11 Mission complex.  I cannot even begin to describe this place.  It is…well…unbelievable.  It sits behind a large concrete wall that surrounds their grounds for protection. It has a great big, tall guard tower, and it sits on a road that is mostly controlled by the horrific MS-13 gang.  We were fortunate not to have any encounters with these folks, though.

Our job for the week was to build chicken coops.  We wanted a way for this facility to become more self sufficient and by building them coops, we realized we could provide them with chickens, which would give them a lifetime of sustainability in meat and eggs.  While some of our team members got to work on the coops, others spent their time loving on babies, playing with the kids, and painting some of the unfinished rooms.  At one point there was a soccer keep away game with their German Shepherd guard dog, there was softball lessons, and lots of tag.  We also had some amazing youth put their violin talents to use and give the kids an impromptu concert.

At the end of the day, 6 chicken coops were built, painting was accomplished, we were tired, hot, sweaty, yet none of us really wanted to leave. It’s hard to explain if you haven’t been there, but there was just an overwhelming presence of Jesus all around, and we all fell in love with not only the facility, but with every single child who resided there.  I am pretty sure some of our youth never put down the babies.

On Sunday, we attended a local United Methodist Church, where our very own Zack Funk brought a strong message of faith to their attendees.  The church was packed, the music was loud, and Jesus showed up in a way that is indescribable here.

After church, we headed to the local barrios and the riverfront where we handed out over 400 lbs of beans and rice to hungry people, we put more than 200 pairs of flip flops on bare feet, and gave Bibles to over 100 people who are so desperate to read the word of God.  After we ran out of supplies, we took a slight detour and found ourselves at a Monkey Park…true story…it’s an open park that has all these monkeys….you can buy “monkey chips” for a few cents and feed them. There is a whole story about the Monkey Park and Zack Funk…but that is for a later story.  🙂

Monday, we found ourselves back at the Jeremiah 29:11 Mission where, while some team members went in search of a cow for the complex, while those who stayed behind ministered to the kids of the complex by just loving on them.  If you think that you have nothing to offer in the lines of ministering to others, I would encourage you to consider joining us sometime, and see how much you loving on a child will be a ministry!

Tuesday offered up a free day…after 4 days of 16 hour work days, they all deserved a break.  We headed to a local beach where everybody took in one of Gods greatest creations…the ocean.  We were able to hand out Bibles and Salvation tracks on the beach and minister in that way as well.

I wished I could do the trip justice by writing about it, but I just can’t….there is just no way to describe what happened that week.  I can tell you that mission work was done in the most unusual ways, peoples hearts were changed, lives were saved…both on our end and their end.  While we may think we were going down there to serve, there is no doubt that they served our souls way more than we ever gave.  Each person who went has their own story and experience.  It was different for all of us, yet the same.  We each encountered Christ in a unique way…whether it was from God bringing somebody to his knees while serving on a river front, or whether it was by something encountering Jesus because she loved on a young lady who had been beaten, gang raped, and thrown off a bridge and left to die…(before she came to Jeremiah’s place, that is), or perhaps it was when a team member was able to use his personal life experience to witness to a Honduran brother in crisis, or maybe it was from providing music by a simple violin….so many stories…so many experiences, each personal, each profound, each life changing!

I  hope to have some blogs coming up from some of the people who went….and maybe through their eyes you can see the experience we had. In the meantime, enjoy some of the pictures….. 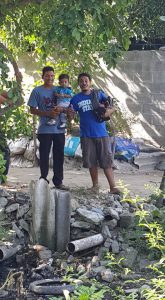